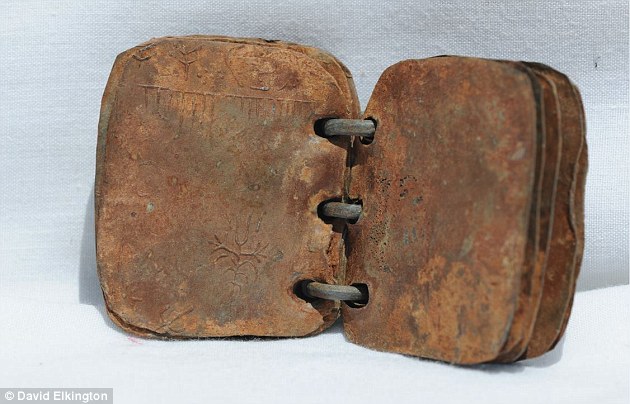 The lead tablets that were discovered in 2008 have been found to be authentic in terms of age, according to researchers.

The tablets were originally found in Jordan by Hassan Saeda, an Israeli Bedouin, in a remote village where it is documented that Christians had fled the area from persecution back in 70AD.

While originally many experts dismissed the ‘book’ as an elaborate fake, now researchers are saying that tests all but confirm that the tablets are in fact within years of the time of Jesus’ ministry.

Professor Roger Webb and Professor Chris Jeynes at the University of Surrey’s Nodus Laboratory at the Ion Beam Centre confirm that after testing the lead, it is compatible with a comparative sample of ancient Roman lead previously unearthed from an ancient dig site in Dorset.

‘While there may be variations in decay and corrosion that depend upon the environmental conditions in which the objects were stored or hidden, there is a strong underlying theme of decay from within the metal,’ said the researchers in a press statement.

‘It is oxidising and breaking down at atomic level to revert to its natural state.

‘This is not witnessed in lead objects that are several centuries old and is not possible to produce by artificial acceleration (e.g. through heating).

‘This provides very strong evidence that the objects are of great age, consistent with the studies of the text and designs that suggest an age of around 2000 years’.

What makes this find interesting though, is that if indeed the book is authentic, the contents of the tablet pages are sure to stir debate for some time to come.

The tablets suggest that Jesus was not starting a new religion at all, rather he was reviving a thousand year old tradition back from the times of King David.

The God that he worshipped was also both male AND female.

One of the core writings of the tablets is that Christ heavily pushed worship in Solomon’s temple, where it was believed that the very face of God was seen.

While the writings do not actually contradict any of the established gospels, they do place greater emphasis on the physical temple, of the belief in the divine feminine and in Christ’s role in protecting a lineage of Hebrews rather than being the founder of his own movement.

One of the tablets (or as they are referred to, ‘books’) also bears resemblance to the description of the book of Revelation, with 7 seals.