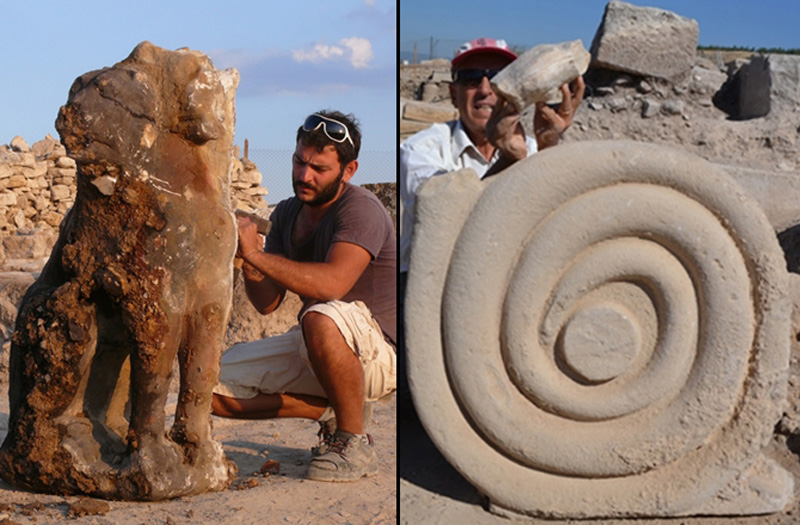 Archaeologists on a dig site in Turkey have found the guardians of the ‘Gate To Hell’ – two unique marble statues which once acted as a warning of a deadly cave in the ancient Phrygian city of Hierapolis, near Pamukkale.

Famously known as ‘Pluto’s Gate’, or Ploutonion in Greek, and Plutonium in Latin, the cave was believed to be a portal to the underworld in ancient Greco-Roman mythology. Francesco D’Andria, professor of classic archaeology at the University of Salento led the team which discovered the cave in March this year.

“The statues represent two mythological creatures,” D’Andria told Discovery News. “One depicts a snake, a clear symbol of the underworld, the other shows Kerberos, or Cerberus, the three-headed watchdog of hell in the Greek mythology.”

The snake statue is coiled onto itself looking threatening to trespassers who dare enter the cave, and the 4 foot tall Kerberos/Cerberus statue represents a Kangal, an Anatolian shepherd dog. The two statues were found by archaeologists as they excavated the area further in March, and it also included an inscription dedicated to Pluto and Kore – the Gods of the Underworld.

Further study of the cave revealed the truth to the original mythology, where Strabo states:

“This space is full of a vapor so misty and dense that one can scarcely see the ground. Any animal that passes inside meets instant death,” the Greek geographer Strabo (64-63 B.C. to about 24 A.D.) wrote about the site.

“I threw in sparrows and they immediately breathed their last and fell,” he added.

During the excavation, Strabo’s account was confirmed, as they found several dead insects and birds, instantly being killed by carbon dioxide fumes.

Check out the full story here at Discovery News.