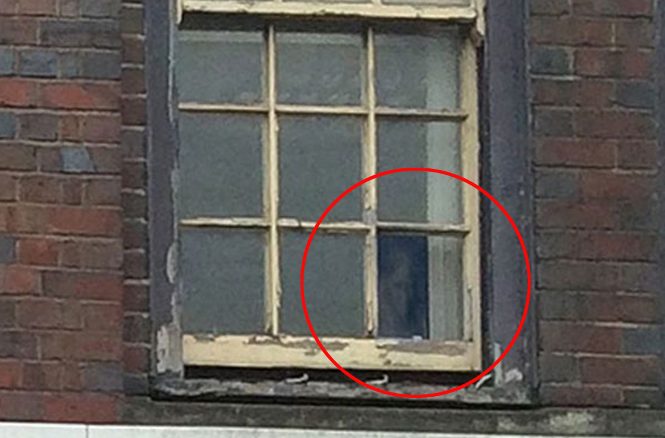 The image is that of a building housing a scrap metal business in Taronis, Aston, a building where people speak of many spooky and paranormal occurrences, which has people believing that it is a genuine image of a ghost in the window.

Staff working in the building have reported on numerous occasions things moving around by themselves, loud banging noise, and cold spots throughout the premises.

A witness describes one incident where workers arrived at the building one morning to find it flooded. The water source later was found to be a smashed toilet upstairs, however no alarms were set off and there was no indication that anyone had been in the building whatsoever.

The manager, Chris Ward, is considering hiring the services of a medium to inspect the building.

“I’d think twice about going up there at night and one guy refused to go up there at all,” he said. “One customer came out absolutely white-faced. He claimed something had come out of the wall.” “There’s definitely something going on. You go up there and the temperature drops so much you have to catch your breath. We’ve been here six years and when the previous owners visited, their first question was, ‘have you seen the ghost ?'”

Is this all signs of a genuine haunting, or nothing more than pranksters and coincidental lighting on a window?