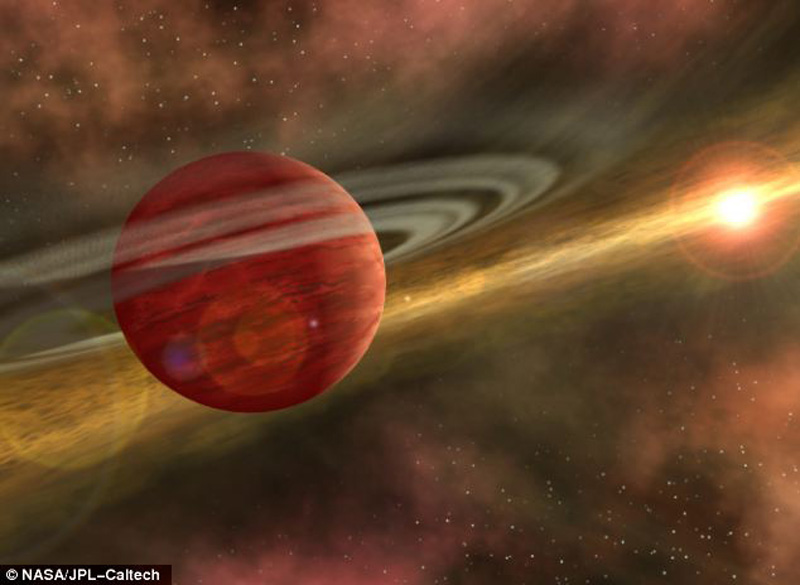 A bizarre world orbiting a star from a previously thought impossible distance has left astronomers baffled to explain it.

The planet, burning at 1500 degrees celcius, is 11 times the mass of Jupiter and orbits its star at an incredibly staggering 650 times the average Earth-Sun distance. According to our current planet formation theories, this should not even be possible.

The planet named HD 106906 b is unlike anything in our solar system or what astronomers have currently discovered. The currently accepted theory is that planets close to their stars such as Earth, are created from small asteroid-like bodies born in the primordial disk of dust and gas which surrounds a forming star. However this process is too slow to form a planet far from the star.

Several alternative theories have been proposed, including a formation like a mini binary star system.

‘A binary star system can be formed when two adjacent clumps of gas collapse more or less independently to form stars, and these stars are close enough to each other to exert a mutual gravitation attraction and bind them together in an orbit,’ said Vanessa Bailey, a student at Arizona University who led the research.

‘It is possible that in the case of the HD 106906 system the star and planet collapsed independently from clumps of gas.’

The problem with this theory is that the mass ratio of the 2 stars is usually no more than 10 to 1. In this incredible case, the planets ratio is closer to 100 to 1.