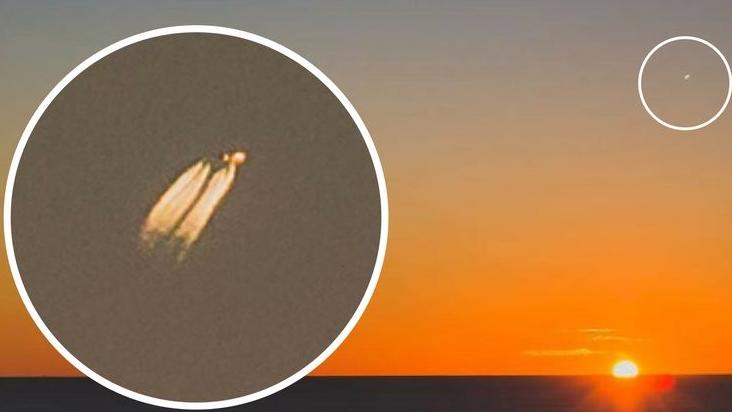 Gus Medero, a man from Narrabeen in Sydney, Australia captured a photo of the mysterious object in the skies over the Northern beaches, and was one of multiple witnesses who could not find a logical explanation for what they saw.

Even the Civil Aviation Safety Authority has described the object as ‘a mystery’.

Medero was up early taking images of the sunrise on July 5 at approximately 7am when his camera also picked up a small white dot in the sky above the sun.

Upon further inspection, Medero describes the object as appearing to have 4 jetstreams coming from its rear.

“I’ve never seen anything like it,” Mr Medero said.

“I can’t really give you a definitive answer (on what it was).”

Another man, Blake Hurst from Cromer, also managed to take photos of the UFO from Dee Why Beach. He was one of many at the time who witnessed the object moving from one side of the sun to the other, before venturing upward into the atmosphere.

“It’s the strangest thing I’ve ever seen,” he said.

“I’m not one to believe in UFOs or ghosts or anything like that but it makes you wonder. Some guy made a joke that it was the North Koreans­ sending a missile.”

Mr Hurst also noticed lights flashing on and off on the object.

Other witnesses who also saw the object thought it may have simply been space junk, while others pointed out it was possible that it may have been the ISS (International Space Station), which may have been visible in the sky at the time.